The effect of Emotional Freedom Techniques on nurses' stress, anxiety, and burnout levels during the COVID-19 pandemic: A randomized controlled trial

Background and objective: Infectious disease outbreaks pose psychological challenges to the general population, and especially to healthcare workers. Nurses who work with COVID-19 patients are particularly vulnerable to emotions such as fear and anxiety, due to fatigue, discomfort, and helplessness related to their high intensity work. This study aims to investigate the efficacy of a brief online form of Emotional Freedom Techniques (EFT) in the prevention of stress, anxiety, and burnout in nurses involved in the treatment of COVID patients.

Methods: The study is a randomized controlled trial. It complies with the guidelines prescribed by the Consolidated Standards of Reporting Trials (CONSORT) checklist. It was conducted in a COVID-19 department at a university hospital in Turkey. We recruited nurses who care for patients infected with COVID-19 and randomly allocated them into an intervention group (n = 35) and a no-treatment control group (n = 37). The intervention group received one guided online group EFT session.

Study Shows Simple EFT Technique Reduces Dental Anxiety
Dentist appointments cause moderate to severe anxiety in one out of three patients, interfering with every aspect of oral health. But a recent study shows that EFT, a simple do-it-yourself acupressure technique, significantly reduced dental anxiety within 10 minutes in over 70 percent of those who tried it.

San Francisco, CA (PRWEB) July 13, 2006 -- An estimated one out of three patients, including adults and children, suffer from moderate to severe anxiety whenever they visit a dentist’s office. Their fear of fillings, extractions, crown and bridgework, and even routine tooth cleaning, often leads to neglect. Untreated dental problems can contribute to serious illnesses, including heart disease.

In the study, patients whose examinations showed that they required treatment such as fillings, extractions, or crown and bridgework were asked whether the thought of the proposed treatment caused them any anxiety. Patients who stated that they felt anxious were asked if they would like to try EFT, which was explained as a form of “psychological acupressure.”

All of the patients who agreed to try EFT were given appointments that included an extra 10 minutes in which to learn the procedure. When they arrived for treatment, patients were asked to rate their anxiety on a scale of zero (completely calm) to 10 (most anxious). Only patients who reported an anxiety rating of 6 or more were used for the study, which involved 30 patients.

After 6 minutes of acupressure tapping, patients were again asked to rate their anxiety. This was immediately followed by the dental treatment. All patients were informed that they could tap on points on their hands, if necessary, during the dental procedure. Following treatment, the patients were asked to comment on their experience.

All (100 percent) of the participants reported reduced anxiety, with over 72 percent experiencing a level of comfort and feeling of control that allowed them to cope well with the dental work as it was carried out.

The study showed that even very brief (6-minute) tapping sessions can significantly improve dental visits not only for patients, who might otherwise postpone or avoid necessary dental work, but for dentists and their staff as well.

“As an EFT practitioner and trainer,” says Dr. Temple, “I use EFT consistently, not only for my dental patients but for myself and other clients who attend my therapy center. I hope that this study will encourage other dentists and their staff to learn about EFT and its effectiveness in dentistry.”

These researchers found that three months after they had learned EFT (in two sessions) these auto accident victims showed significant positive changes in their brain waves and in self-reported symptoms of stress.

Epilepsy - EFT wetenschappelijk bewezen
Another study by Dr. Swingle used EFT as a treatment for children diagnosed with epilepsy. The children were administered EFT by their parents every time each day that the parents suspected a seizure might occur.

Swingle found significant reductions in seizure frequency among these very young children, as well as extensive clinical improvement in the children's EEG readings after exposure to two weeks of daily in-home EFT treatment, an impressive result. This study has not yet been written up but can be cited as follows:

Swingle, P. (May, 2000). Effects of the Emotional Freedom Techniques (EFT) method on seizure frequency in children diagnosed with epilepsy. Paper presented at the annual meeting of the Association for Comprehensive Energy Psychology, Las Vegas, NV.

Phobias - EFT wetenschappelijk bewezen
An excellent study by psychologist Steve Wells and his associates in Australia and the United States studied the effects of EFT on phobias of small animals and insects. This study is published in a leading peer reviewed journal, the Journal of Clinical Psychology.

The results of the study are impressive. Those subjects who had learned EFT, as compared to those in a comparison group who had learned a deep breathing method, showed significantly greater reduction in their fear of small animals and insects - both in terms of their ability to approach the feared animal after the treatment, and their self reported indexes of fear.

What is more, these results held up just as well six to nine months later as they did at the time of the treatment, showing that the results of EFT are lasting - an important consideration.

The deep breathing group improved also in their symptoms, but significantly less so. All told, this careful study represents a strong confirmation of EFT as a treatment for phobias and common fears.

New Study Targets EFT's Effectiveness for Food Cravings
Scientific proof can often come after we've experienced something to be true in our everyday life. In such instances, it validates what we already know and allows us to talk about it now with scientific backing.

This is what is happening with a new study conducted by Dr. Peta Stapleton and a team of researchers at the School of Medicine in Griffith University, Queensland, Australia. It has confirmed what we've been observing for years and what you know as a user of meridian tapping, about how this method can be used to sharply reduce food cravings.

These researchers studied ninety-six overweight or obese adults, one half of whom were taught EFT right away, while the other half had to wait for four weeks while just doing whatever they ordinarily did to control food cravings. At the end of this time, the "waitlist" group was given training in EFT too, but they had already been thoroughly studied by that time. The "wait list" group was the control (comparison) group.

What were these researchers looking for?
Before the research began, they gave the subjects a series of tests to determine the intensity of their food cravings and measure how strong an influence food exerted over them (that is, its "pull" value).

The researchers also investigated the degree of restraint these people showed when faced with tempting food, and the number of psychological symptoms of stress they were exhibiting in their lives generally.

Finally, everyone in the study was initially measured to determine their BMI (Body Mass Index), an indication of the way the body stores and distributes fat -- the lower the BMI, the healthier the fat metabolism of the individual.

After that, and this makes this study particularly interesting, these same subjects were studied again at the end of 12 months. What had happened?
When retested at the end of four weeks, those who had learned EFT showed significantly lowered food cravings compared to the waitist controls who had not learned the method.

What is particularly interesting, however, was that two of the measures, the intensity of food cravings and the pull of the food on them, remained significantly improved at the end of one year in those who had been practicing EFT, demonstrating the holding power of this technique.

Also, the Body Mass Index (BMI) the measure of the body's storage of fat, was significantly reduced in those practicing EFT at the end of one year, a highly desirable outcome.

The results of this study show that EFT can have an immediate effect on reducing food cravings and also result in maintenance of these reduced cravings over a much longer period of time.

In addition it shows that EFT impacts favorably on The Body Mass Index, changing it in the desired direction. The researchers suggest that EFT may contribute to the ability of weight loss/dieting programs to assist people to achieve reduced food cravings and therefore lose weight .

This study was conducted by Stapleton, Sheldon, Porter & Whitty, 2009-2010 (personal communication from the authors). It was funded by a grant from the Association for Comprehensive Energy Psychology (ACEP). The journal article reporting this study is now under review for publication by a professional journal. 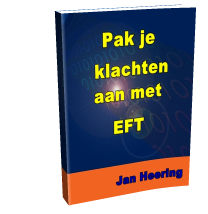 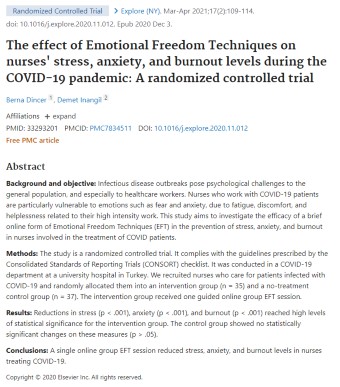